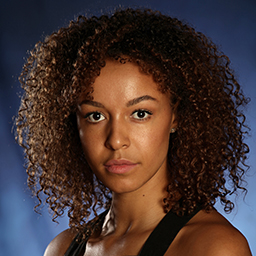 Born in Hackney to a British Nigerian father and Caucasian Australian mother, Vivienne learned to sing before she could talk, in the gospel churches of East London. At the age of five, Viv’s immediate family emigrated to Melbourne where she was promptly thrust into musical theatre classes. Spending 13 years at The Young Australian Broadway Chorus gave Viv an immense passion for live performance, as well as a home under the proscenium arch of Melbourne’s National Theatre.
Viv has performed at the Malthouse Theatre, the Adelaide Fringe Festival, and whilst completing VCE she played the role of Bella in the ABC series The Time of Our Lives.
Before undertaking NIDA’s Diploma of Musical Theatre in 2015, Viv furthered her obsession with the human body and public health by starting a Bachelor of Nursing at the Australian Catholic University, while simultaneously shooting the reoccurring guest role of Alice Azikiwe on Neighbours.
Viv’s social justice-warrior mindset saw that she served loudly as a member of NIDA’s Student Council in 2017. She’s a staunch feminist and as a mixed-race performer firmly believes that representation matters. In 2019, Viv played the role of Hero in Bell Shakespeare’s Much Ado About Nothing, and is thrilled to be another voice for diversity in our industry.

Mattison has a strong passion for sound systems and sound design, with her main interests resonating with abstract and obscured realism.