This Tony Award-winning musical by William Finn and James Lapine is a hilarious and heartrending story of a modern New York family at the end of the 1970s revolving around the life of a gay man Marvin, his wife, his lover, his soon to be bar mitzvah’d son, their psychiatrist, and the lesbians next door. Intelligent and subversive, it exposes all the messiness of loving and growing up.

This visionary musical theatre work is directed by David Berthold (Holding the Man), with music direction by Michael Tyack (Come From Away), choreography by Kelley Abbey (Dancing with the Stars) and is a timely and tender reminder that love can tell a million stories.

David Berthold is one of Australia's most prominent theatre directors and cultural leaders. As a theatre director, he has directed for most of Australia's major theatres companies, as well as in London and Berlin. Since January 2020, David has been Artistic Director in Residence at NIDA where he leads artistic planning and manages partnerships with key organisations

Michael Tyack began working as a professional musician for J.C. Williamsons in Melbourne, cutting his teeth on musicals such as A Little Night Music, Gypsy, Irene, Man Of La Mancha and The Wiz. Michael has been involved with most major musicals and has been Musical Director of many shows. He was awarded a Green Room Award and a Helpmann Award for the musical direction of the Disney/Cameron Mackintosh production of Mary Poppins.

Kelly Abbey is one of Australia’s most accomplished choreographers and performers in film, TV and musical theatre. She has choreographed many major musicals, as well as for Opera Australia, and was Choreographer & Guest Judge for So You Think You Can Dance (Australia and USA). 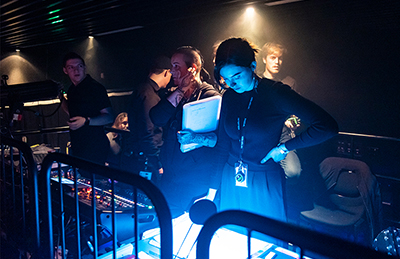 NIDA’s 2019 alumni from the Diploma of Live Production course.