The landmark musical Next to Normal premiered in 2009 on Broadway – winning three Tony Awards – and is an unflinching tale of an ordinary family trying to deal with the effects of mental illness. It is an emotional powerhouse.

With over 30 brilliant songs from soul-soaring rock to heart-warming ballads, Next to Normal tells the story of suburban housewife Diana, struggling to come to terms with her son’s death. It explores issues of grief, suicide, drug abuse, ethics in modern psychiatry and the underbelly of suburban life with love, sympathy and heart.

This new production for NIDA features spectacular choreography from one of Australia’s most outstanding dancer, singer and choreographers Kelley Abbey, who brings her deep sense of joy and movement to NIDA's Parade Theatre.

Directed by theatre, event director, actor and NIDA alumnus Darren Yap – known for his award-nominated productions of Diving for Pearls (Griffin Theatre) and his critically acclaimed productions of Jesus Wants me For a Sunbeam (Belvoir and National Theatre of Paramatta) and Double Delicious for Sydney Festival and Contemporary Asian Australian Performance – the production draws together a creative team of NIDA alumni including Nick Fry (set, video and co-costume designer) and Charlotte Mungomery (co-costume designer). 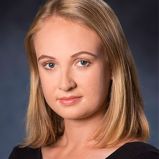 Giorgia was born and predominantly raised in Melbourne, although spent her early childhood living in the United States and United Kingdom with her family.