The world of lighting and design looks bright for Morgan 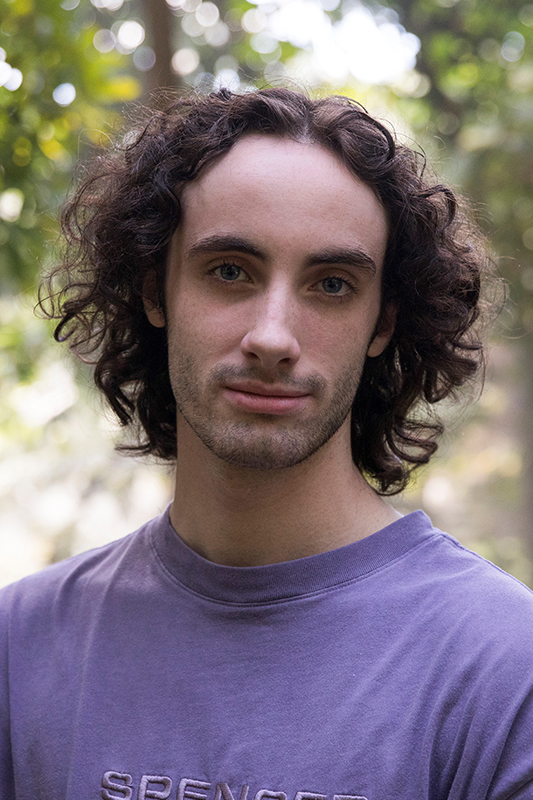 Above: Morgan's work in the October Student Production of Ghosts at NIDA in 2020.

Morgan Moroney is already in demand as a lighting and video designer for theatre, opera, circus and dance productions, since graduating from NIDA last year with a Bachelor of Fine Arts (Technical Theatre and Stage Management).

With his creative and technical production skills at a premium, he’s positive about his future in the live and digital production industry. His work has also been celebrated by the Australian Government's Office for the Arts.

Growing up in Adelaide, Morgan’s artistic journey began at a young age, learning musical instruments and performing in bands. He soon realised he was far more interested in what was going on behind the scenes, and developed a passion for film-making before discovering theatre.

‘At NIDA, I loved the opportunity to work in a design capacity with creative teams across a number of forms, explore technology as a storytelling tool and be at the managerial helm of a work through stage and production management roles’, he said.

‘Being in the rehearsal room with international guest director Robert Schuster as a stage manager in my second year, who visited us from the Ernst Busch Academy of Dramatic Arts in Berlin, was like a six-week master-class in German theatre-making methodologies which was fascinating.’

The October Student Production of Ghosts at NIDA in Morgan’s final year saw the culmination of all his training and experience. Ghosts incorporated digital projection, lighting, live theatre and an electronica-inspired score in a compact and intense retelling of Ibsen’s classic play.

‘We began the design conversations in January with Latvian director Janis Vimba as he was scheduled to join us for the June season of productions,’ said Morgan. ‘Of course, COVID-19 put a stop to that - but with the reschedule came the opportunity to continue the project with the wonderful Priscilla Jackman as director. With Priscilla, we interrogated the purpose of staging a 138-year-old text for a 21st century audience. We arrived at a design language that celebrated our contemporary artistry against the historical figures of the play who are haunted by family legacy, secrecy and patriarchal violence’.

‘Ghosts was a tight collaboration between myself, the set designer and the production manager to practically realise an enormous suspended conservatory window above the playing space. It served as a surface for real water in a beautiful rain effect, as well as becoming a canvas for lighting and video projection. I was very proud of the outcome, particularly after the year of uncertainty we’d had.’

Morgan’s work as Lighting and Video Designer on Ghosts earned him a nomination for an Australian Production Design Guild Emerging Designer for Live Performance Award.

Morgan admits that after graduation running into lockdown as an emerging freelancer was daunting. ‘It was challenging to abandon projects and collaborators in the thick of the creative process,’ he said.

‘Some projects veered onto Zoom, while others began their process digitally and were later postponed or cancelled all together. I’ve been very fortunate over this lockdown to start some work on shows tentatively scheduled for when we can safely return to theatres or in 2022. I’ve also spent some time completing professional development and applying for grants for future projects, of course keeping in touch with teams digitally.’

Morgan said one thing he loved about his NIDA experience was the industry connections that he made. 'Over the course of the NIDA training, so many amazing creative people enter your professional sphere. It’s a place where connections flourish, and these people have been the springboard into establishing my career this year.’

Feeling inspired? Applications for NIDA’s Bachelor of Fine Arts (Technical Theatre and Stage Management) are open until 30 October. There is no fee to apply this year and scholarships are available. All information: apply.nida.edu.

More of Morgan's work can be found at morganmoroney.com

Libby has undertaken leadership roles in developing, producing and managing major arts projects for the past 30 years.