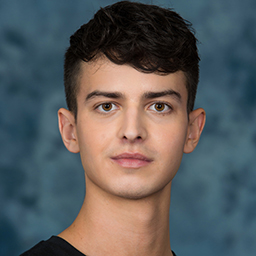 Born in Adelaide and raised in Darwin in the Northern Territory, Roman is of Italian and Macedonian descent. Growing up in an incredibly creative household, Roman began acting with Corrugated Iron Youth Arts from the age of 6, where his passion for performance was fostered. It was after watching the 1980s Italian film Cinema Paradiso that Roman’s desire to become an actor was cemented, putting him on a path that led him to graduate from NIDA at age 20.

Roman and his family travelled extensively around the world throughout his childhood and teenage
years, which introduced him to a wide variety of cultures from a very early age. An avid tennis player, he competed in competitive tennis squads while also studying piano and Mandarin Chinese for seven years.

Roman is excited to begin applying his training and the broad set of skills he has honed at NIDA to work that enables him to further his passion for screen and stage performance, and for storytelling.

Driven by an interest in people and emotion, and with a keen interest in visual and performance art, Angela’s work is often cerebral and abstract, and always true to character and text.