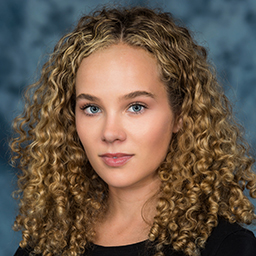 Laura was born in Perth and spent some of her childhood in regional WA and North Queensland, making the most of the outdoors. She began performing as a dancer and has over ten years of ballet training. In her teens Laura joined Redfoot Youth Theatre Company and experienced working with wonderful directors and a diverse range of texts and roles. With Redfoot, Laura toured a self-devised production of The Batavia across England in 2011.

In 2016 Laura graduated from the Western Australian Academy of Performing Arts (WAAPA) with a Bachelor of Performance Making. It was an eye-opening, challenging and empowering three years of training which helped her tune into her own creative instincts and artistry.

At NIDA, Laura has indulged her passion for classical texts by taking the Classical Theatre elective across second and third year and has developed a strong passion for screen acting and films. Laura is excited to work across multiple mediums and be a part of projects that share diverse, authentic and visceral stories.

When not performing, Laura can be found with a camera in hand or, as an experienced surfer, in the ocean.

NIDA's 2019 alumni from the Master of Fine Arts (Writing for Performance) course.