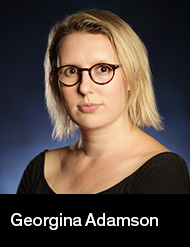 Georgina is an emerging writer who is currently based out of metropolitan Sydney.

In 2015, Georgina graduated with distinction from Charles Sturt University with a Bachelor of Communication: Theatre/Media. Upon graduation she was a recipient of both the Deanʼs Award and the Tim Durick scholarship. While at Charles Sturt, she helped found Bite Productions, which produced her first professional work, INJEST (2015). INJEST was the recipient of the Blair Milan Memorial Touring Scholarship and toured to Bathurst, Perth and Sydney.

Her short play Chicken Curry (2016) was selected as part of Short+Sweet Film Festival and was performed in Sydney, Brisbane and Dubai. Her other professional credits include Cabin Pressure (107 Projects, 2016) and Crackers (The Giant Dwarf Theatre, Bondi Feast Festival and Old 505, 2017).

With completion of her Masters of Fine Arts (Writing for Performance) at NIDA she presented a public reading of her final major work Whose Uterus is it Anyway?