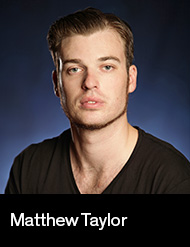 Before starting his study at NIDA, Matt had completed a Bachelor of Contemporary Arts (Theatre), followed by a Masters of Contemporary Arts (Directing) at the University of Tasmania. During his MCA, Mattʼs focus was on Immersive Theatre and the spectatorʼs ability to break the walls during performance, which led to creating a more dynamic and creative experience for both the performers and the spectators. He hopes that he can help grow this industry in Australia.

He came to NIDA with the goal of enriching his knowledge as a director and wants to prepare himself for a professional career in the industry that he has loved so much for the past 15 years. Matt has thoroughly enjoyed his time here and the knowledge he has acquired is colossal. He canʼt wait to see what the future will hold.

His recent directing credits include:

As an Assistant Director: Fraternal (NIDA).

As a Director: Ego by Birdz (triple J Unearthed music video), Persona (Graduation Production), A Stretch of The Imagination (NIDA/NICA), Identity (ACPA), God of Carnage (ACA), Love Me Tender, The Chairs, Down The Road, Donʼt Say The Words (University of Tasmania), Erica & Me (Launceston Players), Slow Train, And A Desert For The Dead (Mudlark Theatre Company).

As a Writer/Director: Your Text Here (UTAS).