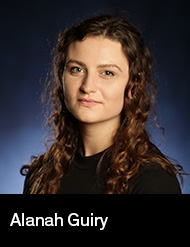 Alanah is an emerging theatre director and poet.

She has been immersed in the arts since her extensive ballet training in Melbourne, which ultimately led to her involvement in the Melbourne independent theatre scene as a director. Her first play (2013) Between Water and Air, won the Judgesʼ Choice award for the Short+Sweet Festival in Melbourne. Itʼs on Me (2014) won Best Short Play at the Kyneton Short Play Festival, and her direction of Michael Gowʼs Away (2015) received three Lyrebird Award nominations. In 2016, Alanah created her theatre company, Rotten Honey, debuting her play Altar Girl, which sold out two seasons (Melbourne Fringe 2016, Adelaide Fringe 2017).

Alanah has completed a Bachelor of Arts at Monash University (2016) and has worked as a performing arts journalist for The Creative Issue. Most recently, Alanah moved to Sydney to study a Master of Fine Arts (Directing) at NIDA (2017), with a specific interest in challenging her understanding of theatre and how it can be used to reveal and unleash the subconscious mind.