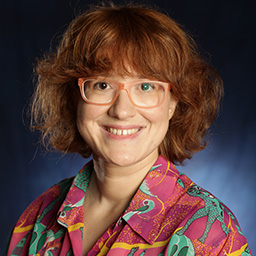 As a child, Rachel would cut up her Barbieʼs clothing and stick the pieces back together in order to create new looks. This was perhaps the biggest clue that she would one day become a costume-maker. Fortunately, when she was a little older, her mother taught her the art of sewing.

Rachel also has a great passion for film and television, and as a teenager wanted to get involved in the filmmaking process. Her wish was granted when she attended Griffith Film School (2010–2012). While there, she took great interest in the production design department and soon realised that most of her time spent on the various student projects was used for making costumes. Being accepted into NIDAʼs Bachelor of Fine Arts (Costume) course two years later helped her to define this pathway. NIDA has allowed Rachel to define areas of costume that she is particularly enthusiastic about.

She loves working with the sculptural aspect of costume, such as millinery, which, along with textile manipulation, costume-finishing and dying, she feels passionate about. Rachel also appreciates historical research (particularly any period with puffed sleeves). Above all, she enjoys making costumes that have a sense of fun, and hopes one day to be working on sci-fiction and fantasy films.