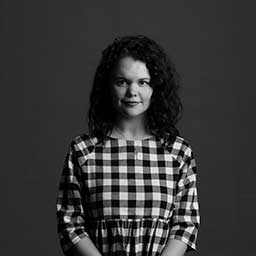 Clare is a writer, harmony enthusiast and pet botherer from Sydney, Australia. After an upbringing spent backstage, knee-deep in confetti and doused in hair spray, it was inevitable that she would follow the yellow brick road into the performing arts. Whilst attending Monte Sant Angelo Mercy College, she sang with the Australian Girls Choir (including appearing as a QANTAS choir girl alongside Hugh Jackman in The Boy from Oz), placing in the top ten achievers in the state for HSC music and performing in the Board of Studies Encore showcase. From here, she underwent a short and sweet encounter with the Sydney Theatre Company as part of their Young Playwrights Residency which propelled her into her Bachelor of Communication (Theatre/Media) at Charles Sturt University. Her undergraduate degree saw her developing a wide range of performance, composition, writing and directing skills, as well as various applied theatre projects (arranging and performing a three-part a capella cover of Blurred Lines for a reimagining of Lysistrata being a highlight). She furthered her education at AFTRS Open and interned with the Australian Theatre for Young People as a dramaturg. In her final year of study, she co-founded leftofcentre theatre collective, with her debut play Elegy traveling to La Boite’s FAST festival, a showing at ATYP and a season as part of Perth’s FRINGEWORLD. Following her graduation from CSU, Clare was thrilled to begin studying at NIDA and looks forward to finding more confetti in her socks (which happens alarmingly often).