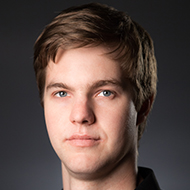 Born and raised in Melbourne, Jack began his association with the performing arts while still at high school. During his gap year Jack undertook a number of work opportunities, getting involved with event management, lighting and sound and continually increasing his interest in working in the event and theatre industries.

With a strong focus in management, Jack has seized every opportunity in his three years at NIDA. To further his skills and broaden his professional network in his final year, Jack has undertaken a number of industry secondments in events, ceremonies and musical theatre. Whilst being on these secondments Jack has developed skills in the areas of production and event management.

After his time at NIDA, Jack hopes to achieve a career in technical direction for large-scale events and musical theatre.

Jack would like to acknowledge and thank all those who have contributed to his time at NIDA.