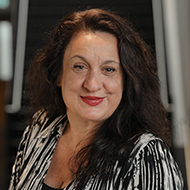 Dr Suzanne Osmond is an academic and practicing theatre professional who has been involved in diverse projects in theatre, live events and film as a costume supervisor, coordinator and production manager. She was responsible for managing the design and production of over 13,000 costumes for the Asian Games in Doha, as well as costumes for the Sydney Olympic Opening Ceremony, Disney’s The Lion King musical and Andrew Lloyd Webber’s Love Never Dies.

Her teaching career spans over 25 years, and she has taught and developed course material for a variety of institutions, including The Australian Film, Television and Radio School (AFTRS), TAFE Sydney Institute, NIDA, University of Technology, Sydney (UTS), and Charles Sturt University. She was Head of Costume at NIDA from 1988 to 1999, during which she played a key role in developing the Associate Diploma in Costume course, now the Bachelor of Fine Arts (Costume).

She is currently the Chair of Performance for the Popular Culture Association of Australia and New Zealand (PopCAANZ), and Reviews Editor for the international peer reviewed journal, Studies in Costume and Performance (Intellect).