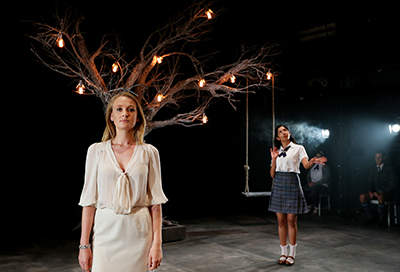 The National Institute of Dramatic Art is honoured to be a beneficiary of the Frederick J Gibson Bequest in Memory of Garnet H Carroll OBE.

Frederick (Freddie) John Gibson was a theatre manager and producer with a particular love of musical theatre. He was the nephew of Kitty Stewart and Garnet H. Carroll and worked first with Garnet Carroll at the Princess Theatre until his move to Sydney in 1967. Gibson was then joint managing director of Harry M Miller Productions from 1969 to 1974, when he took over the management of the Theatre Royal in Sydney until his retirement in 1990.

His association with Cameron Mackintosh led to record-breaking productions at the Theatre Royal of major musicals like Cats, Les Miserables and Phantom of the Opera, and he pioneered the commissioning of subsidised theatre in commercial venues by facilitating productions of companies such as Sydney Theatre Company and Marion Street Theatre at Theatre Royal.

Gibson was instrumental in the formation of the Live Theatre Council of Australia in 1976 and an office bearer and life member of the Australian Entertainment Industry Association (Live Performance Australia). Gibson’s association with NIDA reflects his passionate support of the next generation of theatrical talent and in recognition of his generosity to NIDA, he was posthumously made an Honorary Governor in late 2014.

The first year of the bequest allowed NIDA to address two very important areas of the student experience – international engagement and the showcasing of new work by emerging and graduate artists.

In 2015, the MFA (Directing) students were supported to work with their peers at the Ernst Busch Academy of Dramatic Art in Berlin and to attend the Theatertreffen, a festival showcasing the best contemporary performance in Europe. MFA (Writing for Performance) students worked with international colleagues at the Royal Conservatoire of Scotland, saw the cutting-edge work that is the Edinburgh Festival and met with international literary managers.

During his lifetime, Frederick Gibson had been a great supporter of NIDA design students taking part in the Prague Quadrennial, the largest scenography event in the world, and so in 2015 with the support of the bequest, eight BFA (Design for Performance) students travelled to Prague to take part in the festival. In response to H.P. Lovecraft’s Rats in the Walls, the students created a kinetic sculpture for Kafka House as well as inspired costumes that they wore as they toured the city. Photos capture some very startled Prague citizens confronted by a group of rats on the station escalator!

“These unique experiences are a highlight of the courses for many students,” commented Dr Kipste.

“The field trips allow students to observe theatre at a world-class level and make personal contact with some of the great influencers in the contemporary performing arts industry.”

The work is always bold and daring and explores new ways of engaging with audiences, especially through the use of multi-media and the application of new performance platforms. In October last year, we invited Jim Sharman to launch the 2015 writers’ season with a newly formatted set of play and screenplay readings to a group of assembled industry professionals and audience members. In November, the graduating directors showcased six productions, which provided opportunities for both current students and alumni to be involved.

We are delighted to report great interest in many of these provocative works by the 2015 directors and writers and are convinced that the bequest has led to greater take up by the industry of this new and innovative work and more opportunities for the graduates upon leaving NIDA.

NIDA is grateful to the Frederick J Gibson Bequest in helping to launch the careers of the next generation of Australian directors, writers and designers.

After completing a Bachelor of Arts (Performance Studies) at the University of Sydney, Amanda trained at Webber Douglas Academy of Dramatic Art and The Actors Centre in London.