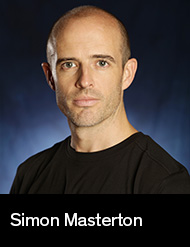 Born in Scotland, Simon holds a double first class MA in French and Spanish from Cambridge University, a PGDip in Music Theatre from the Royal Academy of Music, and a CIOL Diploma in Translation.

He has worked extensively over the past 20 years as a singer, actor, singing teacher, translator and musical director.

Highlights include: Lachiusaʼs Wild Party and Lucky Nurse; devised work with Activated Image; touring as Bass 1 of the Swingle Singers; featured vocalist with Australian Chamber Orchestraʼs Timeline; work with The Song Company; a French-language European tour of Le Petit Prince; and narrating Berioʼs Sinfonia at the London Proms under Antonio Pappano. He is a regular teacher on NIDA Openʼs Musical Theatre courses and is a senior tutor with the Australian School of the Performing Arts.

This year, in addition to providing voice support to the Diploma of Musical Theatre students and BFA (Acting) year three cohort, he is Dialect Coach on Sydney Fringe production The Lady in the Barracks; Voice Coach for Directorsʼ projects Persona and The Year of 13 Moons, and Assistant Dialect Coach on NIDA student productions The Hypochondriac and Hello Again.