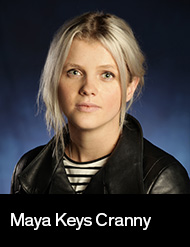 Maya hails from a small country town on the mid–north coast called Bellingen. She was raised in a remote, natural, creative and hardworking household, surrounded by alternative and imaginative people, who encouraged her to focus on building a career around her passions. She went on to study fashion at the Whitehouse Institute of Design, Sydney, for three years, where she developed her attention to design and detail.

After spending a few years pursuing a career in fashion, where she worked for some of Australiaʼs most influential designers such as Dion Lee and Zimmerman, her interest in fashion evolved into an interest in Design for Performance. While studying at NIDA, Maya has worked as a Costume Designer and Puppet Designer on The Caucasian Chalk Circle, and Set/Properties Designer for Realism which was part of the NIDA student production season.