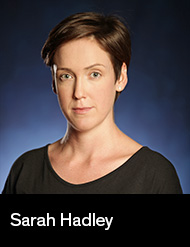 Sarah is a stage and screen director.

In 2013, Sarah completed a Bachelor of Media (Screen & Sound) at the University of New South Wales with Honours in Film. Prior to studying a Master of Fine Arts (Directing) at NIDA, Sarah worked in Film and TV Production around Australia. Sarah has an extensive cinematography portfolio.

In 2018, Sarah will work alongside emerging playwrights on new works for the stage, a six-episode sit comedy for the web, and an auto-biographical short documentary shooting in
Australia and Ireland. Sarahʼs current obsession is the interception of design aesthetic with parallax across performative visual mediums.