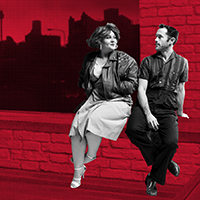 Produced with Garry McQuinn
In association with Palm Beach Pictures
Book by Mitchell Butel and Hilary Bell based on the screenplay by Stephen Maclean
Directed by Kim Hardwick, Musical direction by Luke Byrne

‘It's the monkey in me that makes me want to do it.’

From the iconic 1980s Australian film originally directed by Gillian Armstrong comes Starstruck The Stage Musical, a love letter to Sydney. Set in The Rocks in the shadow of the Sydney Harbour Bridge in the 1980s, the musical follows quirky teenager Jackie Mullens, who works in her mother’s failing pub but dreams of becoming a rock star. With her cousin Angus, they conspire to make one appearance on the national TV talent series, ‘The Wow Show’. Starstruck The Stage Musical features the original soundtrack, including Body and Soul by Tim Finn, the title song Starstruck by Phil Judd, and The Monkey in Me! by Dennis Nattrass.

Approximate run time: 2 hours and 10 minutes, with one interval