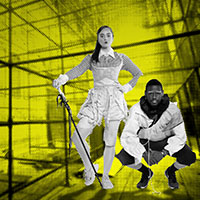 ‘The important thing is to pull yourself up by your own hair.’

Peter Weiss’s play was written in German and first staged by Peter Brook in 1963. The story centres on the murder of the French revolutionary radical Jean-Paul Marat by Charlotte Corday. In telling the story from the perspective of the Marquis De Sade and the inmates of the Charenton Asylum, Weiss constructed a play that through its use of various theatrical forms asks questions of the audience as opposed to providing answers. In the words of Marat, the audience is challenged: ‘To turn yourself inside out and see the whole world’.