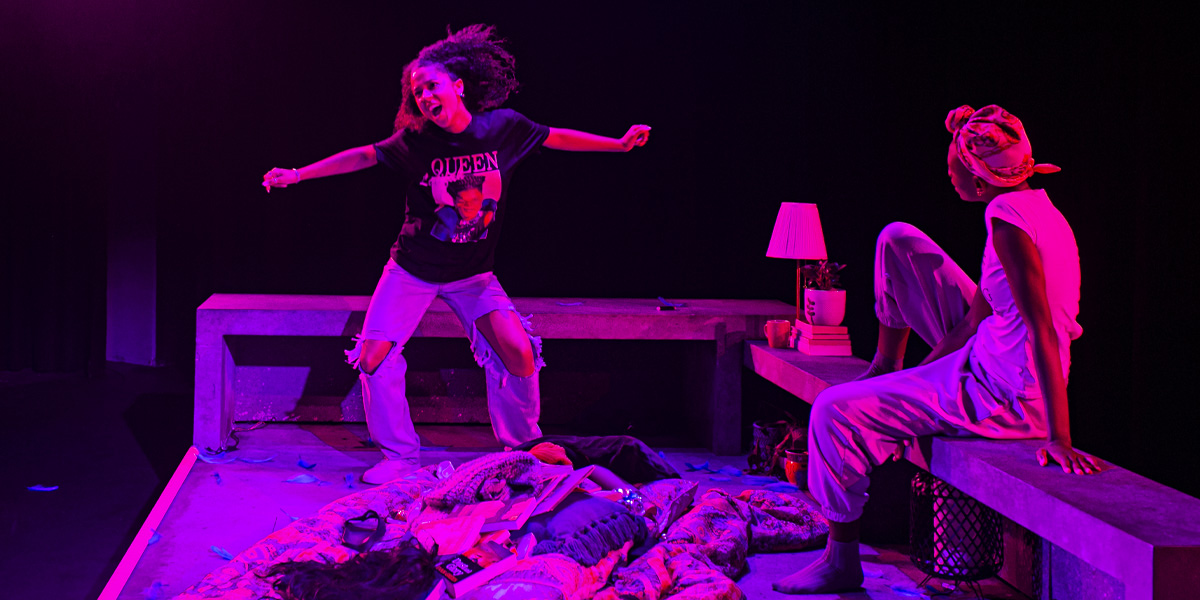 “Knowing what it is to create art that is personal to black identity with bla(c)k women is something so special and powerful.”

Enter Iolanthe, a biracial young woman of Afro-Caribbean, British and Norwegian background. She goes by one name, and it is one you will want to watch out for!

Beginning her studies at NIDA as part of the BFA Acting 2020 intake, Iolanthe has had a roller-coaster of a NIDA experience – with the majority of her time amidst the height of the Covid-19 pandemic. Yet in the wake of the last lockdown, she has skyrocketed into her professional career as one of two leading women in the celebrated 2022 revival season of seven methods of killing kylie jenner.

seven methods of killing kylie jenner by British playwright Jasmine Lee-Jones is a contemporary play in every sense of the word. A fiery commentary of the internet age (think memes, hashtags and internet text-type), on the commodification of Black bodies, colourism, friendship and queerness. It made its debut at London’s Royal Court Theatre in 2019, and had its first Australian run in 2021. This year the play returned to Sydney’s Darlinghurst Theatre Company, before heading to Brisbane’s La Boite and is touring to Melbourne’s Malthouse Theatre in July.

With a cast and creative team led predominantly by women of colour (seven of the 16 female artists are NIDA Alumni), seven methods of killing kylie jenner was given five stars by Broadway World, hailing the work: "Fresh, young, real, and exceptionally woke."

We reached out to Iolanthe to chat about seven methods’ experience, how it has influenced her as a creative and where she’s headed next!

Of course! I think I’m very much figuring out who I am everyday, but the things that I feel certain of are rooted in my identity and passions. I’ve always loved writing and reading, and thought for the most part of my life, that creative writing would be where I end up, but I was introduced to acting late in primary school, and it felt like a place where I could have closeness to words and language, but also to expression and performance – which are things I love. In a very practical sense, my journey to NIDA was from a love of literature to years in theatre school in England to relocating to Naarm (Melbourne), leading me back to acting (at NIDA), but this time in a more committed setting – a degree.

What was the casting and rehearsal process like for seven methods?

The casting was an open callout via social media, which I was already following and aware of because I’d seen the previous season at Darlinghurst earlier in 2021. A few of my friends forwarded me the callout, knowing how much I’d loved the show, and also how specific the casting brief is, in regards to cultural identity, age, gender, accent etc. The audition process itself was relaxed and quick, with a few monologues to prepare, and a really comfy environment in the space. I think from the get-go I was super keen to do it. Rehearsals were GREAT! Working daily with bla(c)k women and creatives was something I’d really missed from leaving the UK and brought myself, and also the show, a huge sense of community and safety. I honestly, would relive that whole rehearsal process a hundred times over.

How did you approach the role? What is your personal creative process?

I’m definitely still developing a creative process. I think studying at NIDA gives you a broad scope of options in terms of creating, but being thrust into rehearsals really made me find which ones worked for me, and which didn’t. I focused a lot on rhythms of speech, because the MLE accent itself and also the text required a specific pace and flexibility. Also, Jasmine Lee-Jones, the incredible playwright of seven methods writes using acronyms throughout the lines and thoughts of the two characters, which just took practice and time to get used to. Otherwise, Kara as a character felt quite familiar to me, she’s written as an Afro-Caribbean/British young woman, which I relate to deeply and could really revel in. 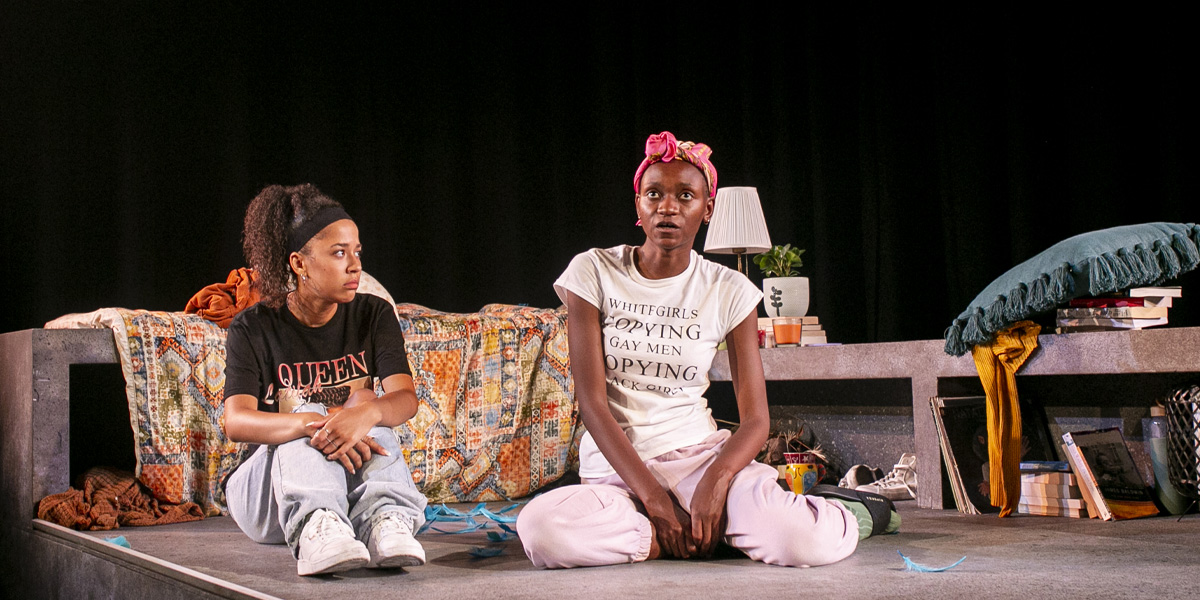 What is one lesson or takeaway from the other creatives on seven methods that has stuck with you?

The list could be endless I swear! I think something that was told to me early on in rehearsals, but only clicked later in the season, was that metaphorically “bleeding” onstage or in a scene can be a great performance, but is not the only way to create a great performance. When we were weeks into the season, and the intense nervousness wore off, and I had done the show multiple times, feeling the same level of emotionality was impossible – but  knowing that it is enough to play actions, and engage in the relationship, know the stakes, and be present with the words was really useful for me.

Social media is a big part of the show. Has working on seven methods changed or affected how you view social media?

Yes and no. I think I’ve always viewed social media with a sense of skepticism and distrust – not that it is inherently negative (don’t get me wrong my social media usage is VERY real) but the permanence of images and words can be scary to me. I think the narrative of seven methods touches on how fast a Twitter thread can move, and how many voices can participate... which can be a really exciting and uniting thing, but also, especially in the context of Cleo’s character, can be really dangerous and violent. Working on seven methods definitely reminded me of this duality.

The 2022 production was predominantly crewed by woman of colour as well as featuring yourself and Moreblessing in leading roles. Can you talk about how that has impacted you as a creative especially in the Australian industry?

I’ve thought a lot about this, and how even subconsciously, for myself, knowing what it is to create art that is personal to black identity with bla(c)k women, is something so special and powerful. Beyond the immense gratitude I have for being in that space, I also know how many infinite narratives there are yet to be told, especially for intersectional bla(c)k community that are here on this continent. It honestly just makes me super excited for the future of the creative industries here, but also I hope that other theatre companies and creatives are looking at the incredible community outreach work that seven methods created, and the evidence that the show offers on the power of letting bla(c)k women thrive.

How did you find life on tour?

Life on tour was overall great! I was in Meanjin for the beginning of the floods and intense rain, which created some hurdles for our shows, but was nothing in comparison to the tragedy of the floods for the communities. Adjusting the show to a different theatre and stage was fun and made everything feel new again! Just hanging out with Moreblessing (who plays Cleo), Ayah (who is our stage manager) and Effie (who is on community engagement) was the best – I really couldn’t complain!

Are you performing in NIDA’s June season? What was it like balancing the show with your NIDA studies?

Yes I am! I’m looking forward to it, definitely a change from the vibe of seven methods, but I love rehearsal periods so I couldn’t be happier! I feel like during the seasons of seven methods and school, I relied a lot on direct communication with my NIDA tutors and teachers. Also, and I hate to thank Covid for anything, but the Covid Zoom era definitely prepared me for online involvement while I was away! Otherwise, I almost want to say it’s benefitted me to have the opportunity to do both; to recognise what aspects I still really want to hone in on and improve, but also to have a perspective on audiences and industry that can only come with doing. I can’t lie, I feel very blessed.

If you had a parting message for those of us who are following your journey, what would you say?

Watch bla(c)k art, follow the careers and trajectories and upcoming projects of Moreblessing, Shari Sebbens (Acting, 2009), Zindzi Okenyo (Acting, 2006), and the whole team of seven methods of killing kylie jenner. They’re all really shaping and changing the industry for the better, and celebrating them is really the only advice I have! Big ups to seven methods, it has my whole heart.

You can see Iolanthe on stage at the NIDA theatres as part of our June Production Season.

seven methods of killing kylie jenner will be showing at Malthouse Theatre from 27 July–21 August 2022. Book tickets here, and check out the digital program from their Darlinghurst Production here.

Feeling inspired?  Express interest to study at NIDA in 2023!

Joseph is an  Aboriginal creative who completed a Bachelor of Fine Arts (Acting) at NIDA in 2018.