What was the Old Tote Theatre Company?

The theatre company played a pivotal role in the development of Sydney theatre tradition, showing innovative works and providing a much needed space for a roll-call of Australia’s most famous actors, directors and designers.

Access to the Old Tote Theatre Company archives is by appointment only. We reserve the right to close any records in our custody where information is sensitive or other restrictions apply. Photographs may be subject to copyright restrictions and charges.

For further information and to make an appointment to access the archives please contact the Archives and Records Manager or call (02) 9697 7595 to discuss your needs.

Series and records available at the archives

The following records, listed by series number and title, are held at the NIDA archives.

We hold company records, including meeting minutes, from 1969 to 1978. Minutes from 1963 to 1968 form part of the NIDA board minutes. The minutes show the decisions of the board and include summaries of the design and reviews of play seasons. Our holdings include financial records and box office takings for each show from 1963.

There is also a vast series of correspondence records documenting the many people, agencies and activities involved with the Old Tote Theatre Company from 1963 to 1978.

The production records include photographs, media collateral and staging notes.

We have an extensive photographic series of most Old Tote Theatre Company productions from 1963 to 1978 by photographers such as Robert Walker, Robert MacFarlane and Graham McCarter. The series also includes proof sheets, prints and negatives.

While the series is open to reference, you will need permission from the copyright holder to make duplicates of any images held.

We hold mounted and unmounted posters from most productions, as well as programs and press releases. We also have press clippings – both advertising and reviewing productions.

For many productions, the prompt copy and stage manager’s records are available, showing some of the specific decisions of the director and the planning involved. 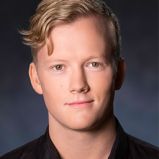 Joseph grew up in Townsville, North Queensland. Much of his childhood was spent playing with his elder brother, making stories and short films amongst mountains of Lego.