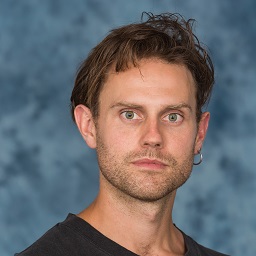 Sam is a director and writer whose work seeks to uncover and exploit theatre’s unique capacities to make vital and compelling art for the time we’re in. Sam trained as an actor at Actors Centre Australia (graduating in 2013), and worked professionally across film, television and theatre. These experiences equipped him with a distinctive insight into the actor’s process, and much of his practice is dedicated to developing the expressive performances that sit at the heart of his work.
This year Sam has directed Strindberg’s Creditors (Actors Centre Australia, 2019), Un/Known (the National Aboriginal Islander Skills Development Association, 2019), the music video It’s All Gravy for Sydney band Blue Velvet, and wrote and directed a new work inspired by Goethe’s Faust for NIDA’s Festival of Emerging Artists.
Sam has co-written and directed the experimental theatre piece Fragments of I AM: 19 Scenes and a Song, which was performed at The Nest in 2014, and the performance-art piece Blackstrap Molasses for the Sydney Fringe in 2017. As the Co-Director of the HRS LabOratorium in 2012, Sam produced and curated multimedia arts events including Lab #1 and Skulls and Rainbows.
Sam has a Bachelor of Arts from the University of New England.