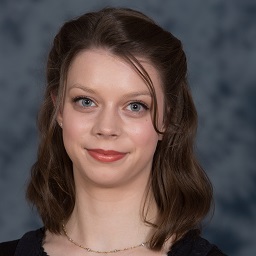 A combined love of early to mid-1900s black and white films, theatre, art, ballet, sewing, garment making and history, all from a very young age, lead Avril to her chosen career as a costume maker. Her high school electives, including History, Art and Textiles, further peaked her interest in historical garments and what goes into making them historically accurate. After completing a Cert III in Fashion at TAFE and other courses in millinery and corsetry, Avril’s dream became a reality when she was accepted into NIDA’s Bachelor of Fine Arts (Costume) course.

Making costumes for NIDA productions such as Orlando and also while on industry placement to Frozen the
Musical, has only further cemented her ambition as a Costume Cutter and Maker for Film, Theatre and Ballet
productions. Her research project was ‘1920s Radium Girls’, which involved using her costume making, design and
historical garment cutting skills, along with exploring new techniques of representing hidden poisons in garments.
This provided Avril with an opportunity extend her project management, making and fabric treatment skills.
Avril is looking forward to using her advanced garment making skills working as a Costume Cutter and Maker on
new and exciting projects within the performing arts industry in both Australia and abroad.