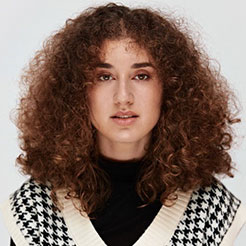 Born to immigrant parents, Zoe is lucky to be surrounded by her Greek and Lithuanian culture and to be able to visit her family scattered around Belgium, South Africa, Israel and Greece. Often feeling like she belongs everywhere and nowhere Zoe made herself a home on the stage.

After graduating high school, Zoe worked four jobs and escaped to New York City to study acting over the summer at the American Academy of Dramatic Art.

After three months of backpacking around Europe, Zoe returned to Sydney to study musical theatre at The Australian Institute of Music before being offered a place at NIDA.

At NIDA Zoe chose the classical elective, won the Hazel Treweek Shakespeare award, fell in love with the tradition of clowning, collaborated with Leticia Caceres on ground breaking live streamed digital theatre in SIX and played Amélie in the first Australian stage adaptation of the film.

Ella is a stage manager and sound designer with a passion for creating large scale, complex theatrical works and intimate, emotive theatrical experiences.