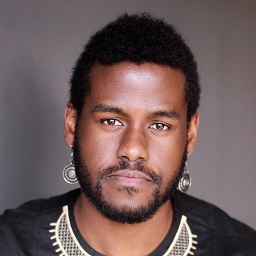 There was once a boy born and raised in Kenya. This boy was a little pocket rocket and thoroughly loved movies and throwing rocks at inanimate objects. Boy became man, pursued dreams in life, garnered one bachelor in Kenya and two master’s degrees (Marketing and International Business) in Brisbane at the Queensland University of Technology (QUT), but discovered he wasn’t happy.

Man at 25 didn’t give up and took a leap of faith instead. ACTING! Man worked hard at ACTING and realised he needed training. Man auditioned and got into NIDA! Why not add one more degree to the sea of... degree knowledge?

Man has learnt a lot about himself as an artist and loves theatre and film (film a little more). Man considers the world his oyster and aims to start his own production company and learn even more skills on the jobs he dreams of getting.

Man is thoroughly loving what he does and knows he’ll be doing it for the rest of his life, no matter what.

Elliot’s main interests lie in comedy writing that explores environmental crisis, human relationships, and the expectations that are placed on us.