Mitchell is a multi-skilled theatre technician and stage manager. Mitchell mainly worked throughout
country New South Wales as an audio technician and operator. At NIDA, he has branched out and
gained experience in all the technical fields – but his passion for audio has remained strongest. As well as
secondments, Mitchell has worked on productions both inside and outside of NIDA productions seasons.
NIDA has also allowed him to work internationally in a variety of contexts through the Peter Baynes
Memorial Scholarship.

in 2020, Mitchell plans to toss the dice, journeying overseas and seeing where the wind will take him. 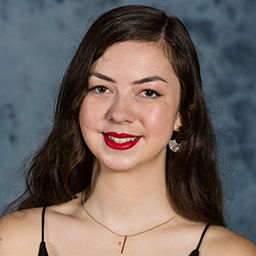 Stephany enjoys the opportunity that working in costume provides to be able to help shape that story for the characters of the stage and screen. After graduation she hopes to work in film and television, both on set in standby roles and off set, creating costumes in the workroom, whilst also continuing  to research and learn more about historical costuming practices in her own time