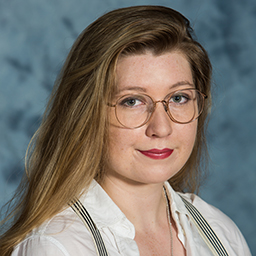 After painting commissioned landscapes and portraits in Canberra, Sophie left and moved to Vienna, Austria and attended the Boerhaavegasse Performing Arts Gymnasium which cultivated her love of art and historical objects.

In 2017, Sophie relocated to Sydney to undertake the Bachelor of Fine Arts (Properties and Objects) at NIDA. In her final year, she has been props supervisor for God of Carnage (directed by Judy Davis) and Roberto Zucco (directed by Robert Schuster), as well as exploring installation art in her masterwork Evolution of the Light Vessel.

To conclude her studies at NIDA, Sophie is travelling to London for a secondment at The London Architectural Salvage and Supply Company (LASSCO). There she will engage in sourcing and restoring an eclectic array of objects as well as restoring furniture, parquetry and unique architectural features.

After NIDA, Sophie aspires to expand her knowledge of art and object-making.