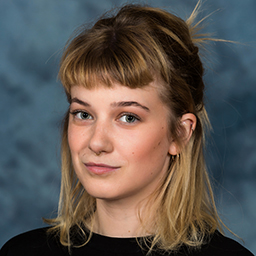 Angela is a Sydney-based production designer. Driven by an interest in people and emotion, and with a keen interest in visual and performance art, Angela’s work is often cerebral and abstract, and always true to
character and text. Her credits include the much-acclaimed Sydney Fringe show Everyone I’ve Ever Loved or Slept with or Both (dir. Liz Arday) and productions at NIDA, including triple j Unearthed artist Charbel’s
River of Neglect music video (dir. Flynn Hall) - see below. In 2019, Angela realised her set and costumes for Faust (dir. Samuel Trotman) as part of the NIDA Festival of Emerging Artists.

Angela is one of two resident production designers in the Ignite Collective, the experimental arm of Sydney-based New Ghosts Theatre Company. In 2020, Angela will contribute to two new works with the Ignite Collective. Significant work placements include The Kiss of the Spiderwoman (Melbourne Theatre
Company) and Sherbert Rosencrantz, You’re Beautiful (Trifle Films).

After graduating Angela is excited to be a part of creating new, exciting and challenging work across the live performance, fashion and screen industries in Australia and abroad.

NIDA's 2019 alumni from the Master of Fine Arts (Design for Performance) course.