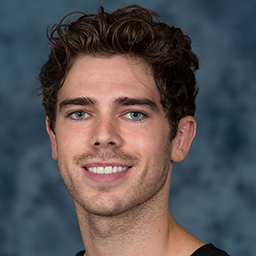 Matt grew up in the burbs of Melbourne and fell in love with movies at a young age while watching Channel 9’s Friday night films with his dad (usually Indiana Jones but not exclusively). His sisters would often tease him for being a ‘TV head’, but the joke was on them when Dad used the TV guide in the newspaper to light the fire and the only answer to ‘what’s on tele?’ was Matt’s profound knowledge of program scheduling. Matt has inherited his mother’s cheekiness and his father’s work ethic and cites family as a huge influence on his acting.

Bouncing between degrees and not sure what to do with his life, Matt spent a year backpacking through Europe. Upon his return he decided to pursue his dreams in acting and that NIDA was the perfect stepping-stone to do so.

Over the last three years at NIDA he has met incredible directors, teachers and actors. He is excited to work with more brilliant, diverse artists out in the industry and continue to grow as an actor and a human being.

Leah is curious about social media and reality TV and how these platforms have become our main mediums of entertainment. She loves writing characters based on ‘influencers’ and their obsessions with make-up tutorials and their insatiable appetites for recording everything resulting in a growing culture of narcissism.