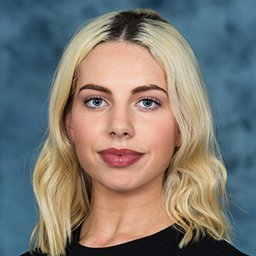 Charlotte grew up immersed in the arts from birth and always knew it was where she would end up. Although always warned by her mother of the difficulties and downsides of a career in acting, it seemed impossible that she would end up doing anything else.

Charlotte excelled at school and had a love of learning, but it was clear that a conventional path was not for her after she enrolled in the University of Sydney and dropped out two weeks later. Charlotte then decided to travel to London to study at LAMDA over the summer and was entranced by the theatre scene in the UK.

After going to the theatre almost every night for two months, her passion and deep love for storytelling became firmly ingrained. This fact was eventually accepted by the family when Charlotte was offered a place to study at NIDA.

Charlotte looks forward to creating her own work. With a strong passion for writing, she hopes to make the content that she feels is currently missing in the industry.