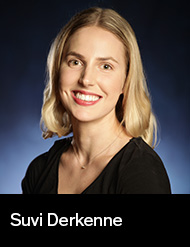 Suvi is a Finnish-Australian visual artist, writer, and cinephile. Having spent her formative years near Dorothea Mackellarʼs ʻragged mountain rangesʼ, Suvi is an avid environmentalist, whose work focuses on themes of ecology, country, landscape and animals.

Her screenplays have been nominated for the Academy Awards Nicholls Fellowship (2014, 2015), the Australian INSIGHT award (2015) and the John Hindes Award for Science Fiction (2016).

In 2016, Suvi graduated from Macquarie University with a Bachelor of Art, receiving the Marjorie Robertson prize for Creative Writing (2015), and first place in undergraduate Philosophy, and English Literature, as well as the Faculty of Arts Highest Achiever Award (2016).

Her passion for writing for performance grew during her time at NIDA to that of writing for radio, with part of her major work, bird song, published by Southerly magazine.

Suvi hopes to combine her love for academia and creative writing next year to undertake her PhD in writing for radio, womanʼs voices, and feminism(s).