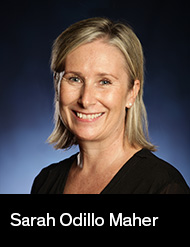 Sarah is a writer, script-editor and researcher. Her short films include Directions (Adelaide Film Festival) and Angel (Definition Digital Media UK). In 2016, her musical Possession (comp. S.Whitelock) won Melbourneʼs Short+Sweet Festival for Music Theatre. Prior to this, Sarah was a writer for Celebrity Speakers Australia and Special Projects Manager for the Australian Writersʼ Guild.

As a researcher her credits include The Water Diviner (dir. Russell Crowe); The Secret Daughter (Screentime); Peter Allen: Not The Boy Next Door and Catching Milat (Shine Australia). For Southern Star Endemol her credits include Howzat! Kerry Packerʼs War (Network Nine); Paper Giants: Magazine Wars (ABC TV); and Rush (Network Ten). As Assistant to Producer John Edwards her credits include Love My Way (Foxtel); Tangle (Showtime); Out of the Blue (BBC/Network Ten); and Dangerous (Foxtel).

Prior to this, Sarah was Stage Manager of The Phantom of the Opera (Melbourne, Sydney) and Les Miserables (Asia and South Africa) for Cameron Mackintosh. She is a previous graduate of NIDA with a Bachelor of Dramatic Art (Technical Production).

Undertaking the MFA (Writing for Performance) course has enabled Sarah to reconnect with her creativity and further explore the dynamics of story-telling through stories that deal with the relationships that define, divide, and bind us both individually and collectively.