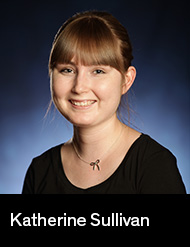 Katherine is an emerging screenwriter from Brisbane. She first made her mark at the age of 16 when she won the title of Girlfriend Magazineʼs Teenage Blogger. Over the years, Katherineʼs passion for writing grew and she graduated from The University of Queensland with a bachelor of Communication/Arts in 2016.

Katherine worked for The Creative Issue as an arts writer for two years, where she spent an enjoyable amount of time in darkened spaces reviewing the latest films and theatre. Her time at the online magazine saw her interviewing Australiaʼs leading entertainers and creatives.

Katherine also worked as Screenwriter for The Role of Scarlet (Scripted Space Project) and The Calm Before (short film), and as Writer and Assistant Director for ACPA/NIDA Collaboration.

In August 2017, Katherine was one of the successful applicants of Endemol Shine Australiaʼs Smart for a Girl: Roar competition. This program was designed to address the lack of opportunity for entry-level screenwriters in the television industry.