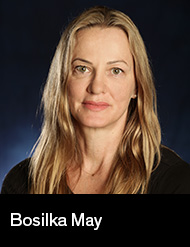 For the last nine years, Bosilka has lived with her family in Sydney and now this is home. She spent most of her formative years and adult life in London and Europe, where she studied film, media and photography at London College of Communication. She also studied and performed movement and dance and was part of productions at The Place Theatre London, with London School of Contemporary Dance ensemble. She collaborated in productions of short films and videos, photographing dance and performing arts and teaching dance, movement, pilates and yoga classes.

In addition, during her time as a student, Bosilka worked as front-of-house staff at The Royal Opera House Convent Garden and was involved as an extra in opera productions for over four years.

Bosilka was fortunate enough to be accepted into NIDAʼs MFA (Voice) course and to continue this wonderful journey. Over this past year at NIDA, she has assisted with teaching both at Sydney Theatre School and for NIDAʼs Diploma of Musical Theatre students. She has also provided show support for NIDAʼs year three BFA (Acting) students for the June productions season, and has been teaching voice at Villawood Detention Centre, Sydney.

Bosilka is very passionate about the performing arts and has always loved theatre and the spoken word. Until recently she didnʼt have the confidence to speak and have herself heard. But now she does, thanks to embarking on a journey three years ago to express herself as an actor. It is an art form that she loves and the MFA (Voice) course has heightened her abilities in it. It has been a wonderful way of expressing herself and helping others to express themselves, to make that connection with thought/intention, voice and body – that are all inter-connected with whole person. The voice is part of whole person and an expression of the body. It is not only about hearing the sound but feeling and experiencing the sound/voice through the body.

This year on the MFA (Voice), Bosilka has embarked on singing and using methodologies and teaching practice, has incorporated singing, melodies, and rhythms to free and relax the whole person and find their own voice. She has also used this approach when working with hearing impaired students/performers – encouraging them to find and free their own voice.

Her international teaching placement for next year is going to be at Royal Conservatoire of Scotland and at the Copenhagen International School of Performing Arts. She is excited and thrilled to continue her own personal education and development as a voice teacher.