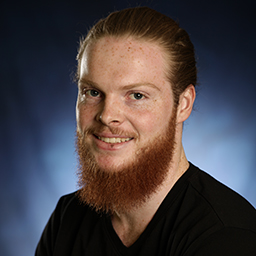 Growing up in Canberra, Jack began building props from a young age for costumed events and Live Action Role Play (LARP).
It wasn’t until 2014 that he started building props for theatre, as part of the St Edmunds College Canberra entry in the Bell Shakespeare’s Schools Festival as the Props and Sets Manager. His work won the College’s ‘Technology and Applied Studies: Design Innovation’ Award.
After graduating, Jack spent a year as a Prop Maker with the Canberra Philharmonic Society 2015 productions of Evita and Pirates of Penzance developing skills in preparation for his application and enrolment in NIDA. It was during this time he took a keen interest in hand props, specifically theatrical weapons.
It was this interest in theatrical weapons that inspired his NIDA Masterwork ‘The Langeid Quadrilogy’ which is a collection of four theatrical swords, each with its own unique theatrical purpose. The project explored different materials as well as manufacturing methods from traditional metal work through to 3D printing and laser cutting.
Since graduating Jack aims to further develop his work in live theatre and LARP, with the dream of one day owning a theatrical armoury, manufacturing weapons for live performance.

Mikala is a director and writer based in Sydney.