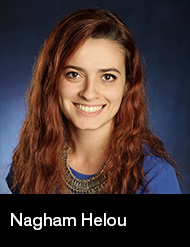 Nagham grew up in Beirut, where she completed a Bachelor of Arts in Visual and Performing Arts – Cinéma at Université Saint-Esprit de Kaslik in 2015, while working as a photographer. Though predominantly working in the Arabic language, she has also acquired fluency in English and French.

She is a versatile artist, pursuing her passion for the Arts by writing, designing, directing and editing short films.

Having explored her passions to the fullest in the Old City, she moved to Australia in 2016 to undertake the MFA (Design for Performance) course at NIDA. Nagham designed the set of The Caucasian Chalk Circle, which was directed by Egill Heiðar Anton Pálsson, and continues her great work as a Costume Designer for The Country Wife, directed by Tom Wright.

Having come from the world of film, Nagham has greatly enjoyed translating her passion for cinema to the stage. She looks forward to the opportunity to apply her stage and screen skills using extensive research and collaboration to find a distinctive identity for each future design work.