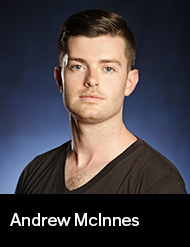 Andrewʼs work is entertaining, darkly comic, visual theatre, embracing heightened theatricality. He has been active in traditional and experimental theatre in Sydney and Newcastle as a director, writer, movement director, and performer since 2008. A graduate of the University of Newcastleʼs Drama program, he also studied gestural theatre and mime at lʼUniversité de La Rochelle, France under Barbara Simonnet.

Andrewʼs directing credits in 2017 include a music video for Find You by Tim Ayre in collaboration with triple j and rage, Mad Clown Vaudeville with the National Theatre Drama School, Ubu Roi with the National Institute of Circus Arts, and Timeless with the Aboriginal Centre for Performing Arts. In December 2017, he will work with graduating designer Heather Middleton to stage UBU, a new adaptation of Alfred Jarryʼs Ubu Roi at NIDA.

Prior to 2017, his most recent projects include co-directing All in the Timing by David Ives with Stooged Theatre, assistant directing The Block Universe by Sam OʼSullivan with Dominic Mercer, and assistant directing Between Two Waves by Ian Meadows with Carl Young.