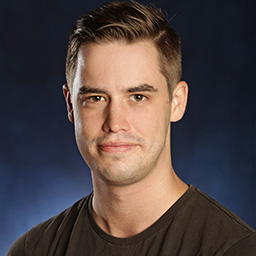 After finishing his School Certifi cate in 2007, Mathew completed his three-year Certificate III in Carpentry at TAFE. He worked for four years in the building industry, learning a vast array of skills and communication techniques. Throughout this period, Mathewʼs love for design grew stronger, prompting him to reassess his career and move towards a more design-orientated future.

During his final year at Enmore Design Centre, Mathew discovered the Bachelor of Fine Arts (Staging) course at NIDA and was thrilled to be accepted into the three-year program. During this time, Mathewʼs love for building and design has continued to flourish as he learnt more about the theatre industry. He has also found new passions in the fields of mechanics, electronics and Movement Control Systems. Using all these skills, Mathew created his final NIDA third year Masterwork.

Mathew continues to grow as an individual and intends on pursuing a career where he can use all of his many talents acquired since leaving school, coupled with his work commitment, dedication and his new found love of movement.