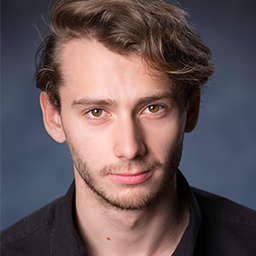 Mark is a Sydney-based theatre maker and director.

His theatre career began at the age of 14 when he co-devised and performed in The Colour Play (2009), which toured to independent theatre festivals across France, Spain and the United States.

In 2015 he graduated with a Bachelor of Performance from the University of Wollongong where he studied acting and was mentored in directing by Tim Maddock.

There, he received the inaugural Emerging Theatre Artist’s Award (2015) for high calibre of work as a director, and the Merrigong Performance Prize (2016) for the highest final mark in the major production Hold Onto Hope (2015, PACT centre for emerging artists).

Directing credits include Thirty-Six/Four (2014), Closer (2015) and Duet and Bogey Man (2015, chosen to represent UOW at the Asia Pacific Theatre Schools Festival in Singapore).

Mark is interested in visceral theatrical experiences that embrace the multi-disciplinary nature of the form, and demand attention in the modern world.