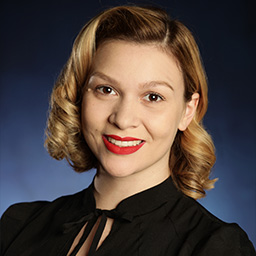 With an ever-growing interest in the film industry, Isabella completed a Bachelor of Digital Television & Film at JMC Academy in 2012. It was there that an interest in costume developed, and to further her knowledge in this area, Isabella obtained an Advanced Diploma in Design for Live Theatre, Film & Events from Enmore TAFE, and a Certificate III in Clothing Production from Ultimo TAFE in 2014.

While at NIDA, Isabella has enjoyed learning to cut and sew period garments, create corsets and tailored garments.

Isabellaʼs Major Research Project focused on Charles James – a revolutionary Couture Designer of the 1940s and 50s. She travelled to New York and Chicago to investigate his unconventional garment construction techniques and view his creations in person. Isabella was able to follow Jamesʼs example by heat molding nylon boning to retain a four leaf clover shape and create a culmination of his two ʻCloverʼ designs in one evening dress.

In the near future, Isabella hopes to work on period productions to gain a greater understanding of the different period details, cut and fit of the clothing.

JoJo is an emerging writer based in Sydney.