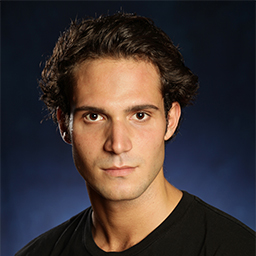 Alex grew up by the beach on Sydney’s Central Coast and is of Romanian and Cypriot descent. He has performed in theatre from a young age and also tried to take up breakdancing classes to be cool.

In 2013, he travelled to America to work at the internationally renowned Miami Art Basel Festival, and returned to Sydney to study Art History and Design at The College of Fine Arts. After a year of study, he decided to continue pursuing his love for performance and, at the age of 19, was accepted into NIDA.

During his time at NIDA, Alex majored in physical theatre and has taken part in the development of multiple new Australian works. He performed the role of Orpheus in the debut season of Jane Montgomery Griffiths’ new play Eurydike + Orpheus and was a key collaborator on the 2016 graduate show, there will be a climax, in which he will perform next year as part of Red Line Productions’ 2018 season at the Old Fitz Theatre.

In his second year, Alex was awarded the Hazel Treweek Shakespeare Award for his performance as Malvolio in Twelfth Night.

Ruby’s appetite for theatre and making stems from a childhood of attending theatre productions and art exhibitions in Melbourne. From a young age, she was encouraged to pursue artistic avenues through exploring mixed media sculpture, graphic design and illustration.