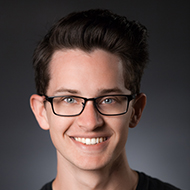 Joshua’s passion for the creative industries begun at age 10 after attending drama classes at the Young People’s Theatre in Newcastle. Both on and off stage Joshua was involved in 24 productions. He developed skills in lighting, sound and stage management and was appointed the technical officer by the management committee. Eager to learn more about professional theatre, Joshua applied to NIDA.

In his final year at NIDA, Joshua has had the opportunity to work with some of Australia’s leading entertainment practitioners within three unique environments. These included the City of Sydney’s New Year’s Eve Celebrations at Dawes Point, Handa Opera on Sydney Harbour’s production of Aida and the Royal Shakespeare Company’s production of Matilda The Musical, where he worked with the stage management team during rehearsals, technical rehearsals and previews for the Australian premiere at the Lyric Theatre Sydney in August.

Joshua would like to thank his family and those who mentored and encouraged him throughout his time at NIDA.