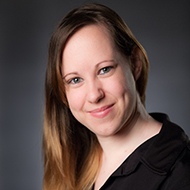 Gin grew up in Melbourne where she started performing with her local dance school from an early age. She continued to dance and be a part of Rock Eisteddfod shows throughout her high school years. While studying a Bachelor of Human Services at La Trobe University, Gin became involved in the university’s theatre society, during which her interest shifted from performance to backstage. In her final year of study Gin realised her passion for theatre was more than just a hobby, it was a career path she wanted to pursue.

Following the completion of her Human Services degree in 2012, Gin moved to Sydney to undertake the Production course at NIDA. During her three years at NIDA Gin has found that stage management for operas and musicals is the area where she wants to work.

Gin wishes to combine her love of theatre and travel by working in Australia and overseas.