'Our digital future will favour the creatives': writers In Conversation at NIDA 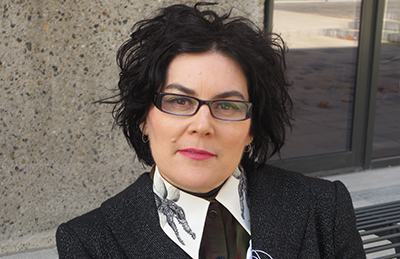 Despite the dire warnings about the impact of screen devices on society, one of Australia’s most prolific playwrights, Alana Valentine, is more than positive about the future. ‘The future is going to favour creatively-trained people who are pattern-recognisers and empathisers. We are moving from the Information Age to the Age of Purpose,’ says Valentine.

As Sydney’s Writers Festival fever takes hold, Valentine joins other masters of modern drama, award-winning screenwriters and playwrights, celebrated presenters and film-makers to sit down and talk writing as NIDA presents In Conversation: Writing in the Age of the Technological Apocalypse on Wednesday 10 April.

'Writers like Daniel Pink have posited that technology is eliminating task­ driven work and will privilege people who can do things that technology cannot ­- make connections between seemingly unrelated ideas and translate that into something new,’ says Valentine. ‘We are moving into a time when genuinely inventive, creative people will flourish as knowledge workers' jobs are taken by technology and creative design, provenance, sustainability and beauty becomes primary.’

Five brilliant minds share insights into the writer's life and craft, and ask the question on everyone’s lips: are we less creative now in the age of screen device and click bait obsession?  How much has the access to streaming of international content impacted on Australian stories?

‘The more successful you get in this business the more actively you have to fight against replaying the best bits from other movies,’ says John Collee.  ‘Because real life experience is inconvenient, uncomfortable and complicated. When you've got a bit of money it's very tempting not to put yourself through all that. But you have to, or your writing will lack real guts.’

‘With a decline in funding for the arts it can be confronting for Australian writers working in the performance area,’ says Sewell. ‘There is a huge impetus to pursue opportunities overseas, as so many of our creatives have. Does Australia actually want creative writers? Is our industry worthy? Appreciated?'

Bringing their life experience to the table, the panel will discuss with the audience issues in our era of change. Do writers have a duty? What is their task in the era of Trump, racism, climate change and terrorism? How has character diversity changed? And how can writers make that change happen?

John Collee is a former doctor, novelist and screenwriter whose films, often co-written with their respective directors, have three times been nominated for Oscars. His huge body of work defies classification: from blockbuster action, (Master and Commander), to period drama (Creation), and animated family movies (Happy Feet and Walking with Dinosaurs). His foreign language films include the recent Chinese hit Wolf Totem and the Oscar-nominated Tanna. His ensemble thriller Hotel Mumbai starring Dev Patel and Armie Hammer will open in March, and his revenge movie Monkey Man, co-written with Dev Patel, will start filming in August with Dev Patel starring and directing. He’s currently writing a war movie for director Phil Noyce.

Michael Gow is widely-regarded as one of Australia’s greatest living playwrights. Best known for his bona fide Australian classic Away, his work as writer and director stretches much beyond, spanning theatre, screen and radio across more than three decades. As a playwright, Gow’s work is both award-winning and critically acclaimed. He has received two NSW Premier’s Literary Awards (Away and Sweet Phoebe); two Sydney Theatre Critics' Circle Awards (Away and Furious); the Australian Writer’s Guild Major Award for Writing and for Best Play (Away), a Green Room Award (Away), an AFI Award for best Mini-Series (Eden’s Lost) and a Helpmann Award for New Australian Writing (Toy Symphony). Michael began working with STC in 1986, just two years after The Wharf opened. Since then, he has worked on more than thirteen STC productions as both writer and director. A champion of Australian theatre, during his tenure as Associate Director Gow was also the inaugural Artistic Director of New Stages, an STC development program with the aims of experimentation and outrageousness.

NIDA's Head Writing for Performance Stephen Sewell is one of Australia’s most celebrated and experienced writers. He has won great popular and critical acclaim as a playwright, screenwriter and novelist, as well as directing for both theatre and film over a career that has spanned 30 years. Stephen chaired the Australian National Playwrights Centre for a number of years, is the recipient of numerous awards and his work has been performed in most major Australian theatres and in New Zealand, the US, the UK and Europe. Stephen is best known for his film and theatre work, including his AFI Award winning screen adaptation of The Boys, his role as script editor on the feature film Chopperand his numerous plays such as The Blind Giant is Dancing, It Just Stopped and the highly awarded Myth, Propaganda and Disaster in Nazi Germany and Contemporary America: A Drama in 30 Scenes.

NIDA graduate Nell Schofield is a presenter, performer and film maker whose latest films include Guarding the Galilee (2017) and A Mighty Force (2018). Nell has worked on a range of projects with ABC TV, Showtime, CNN International, Channel 9, and ABC Radio National amongst others. She narrates documentaries such as Australia Says Yes, Project Manta, and as well as popular programs like ABC’s Media Watch. She has served as Vice President of the Bondi Girls Surf Riders, and as director of the Sydney Festival, Object: Australian Design Centre and Rock Surfers Theatre Company.

Alana Valentine is a graduate of NIDA and an award winning playwright. Her AWGIE Award nominated Barbara and the Camp Dogs, co-written with Ursula Yovich will be produced in 2019 at Belvoir Street. First presented in 2017 it was nominated in the Sydney Theatre Awards for Best New Australian work and Best Original score. In 2019 a jazz song cycle, Flight Memory, will be presented at The Street Theatre in Canberra and the Seymour Centre will present Made To Measure, a commission from the Charles Perkins Centre, University of Sydney, where Alana was Writer in Residence in 2018.

Alana’s play, Ear to the Edge of Time, was the winner of the 5th International Playwrighting Award, and she is the recipient of two Tasmanian Theatre Awards 2017 for The Tree Widows, which received the Best Writing in a Professional Production Award and the Judges Award for 'creative integration of community, culture and heritage'.

Alana’s work The Ravens won the 2013 BBC International Radio writing Award and the National Library of Australia published Dear Lindy. Her plays Parramatta Girls and Shafana and Aunt Sarrinah are both currently on the NSW Schools Syllabus in Drama and English respectively. Alana worked with Bangarra Dance Theatre as dramaturg on Dark Emu and Dubboo: Life of a Songman and in 2017 on their Helpmann-Award winning Best New Australian work Bennelong.

Spending 13 years at The Young Australian Broadway Chorus gave Viv an immense passion for live performance, as well as a home under the proscenium arch of Melbourne’s National Theatre.