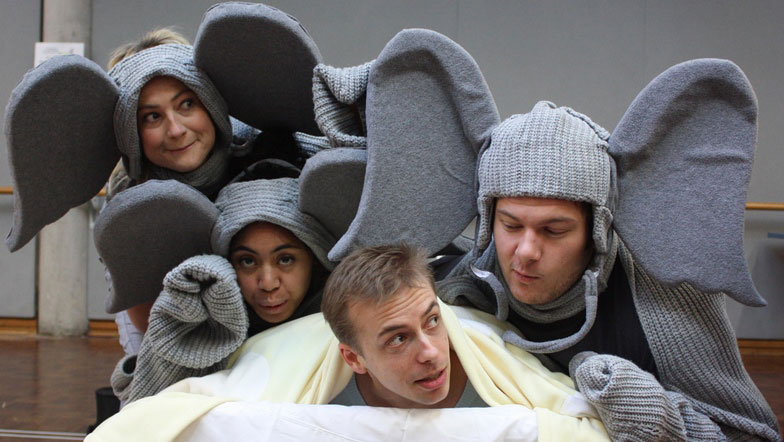 In Eric’s house there were too many elephants – in the living room, in the kitchen, in the bathroom, even in his bedroom!

This May NIDA’s Parade Theatre will be taken over by elephants in the first ever live version of Too Many Elephants in this House, the award-winning children’s book by Ursula Dubosarsky and illustrated by Andrew Joyner.

This original collaboration between Penguin Australia and NIDA Open introduces younger audiences to the excitement of live theatre while celebrating what makes Australian children’s writing so great.

In the book, Eric’s mum says the elephants take up too much space and they have to go, so Eric comes up with a clever solution to this very big problem.

Head of NIDA Open, Caroline Spence, says the performance is full of laughs and mystery that take a playful look at creative problem-solving.

“Ursula and Andrew’s book is such a fun way for kids to explore concepts like size and space, we’re really happy that NIDA had the opportunity to bring this book to life on stage.”

Author Ursula Dubosarsky said she was excited to see Eric and his elephants take over NIDA’s Parade Theatre.

“I can’t wait to see how NIDA tackles the challenge of cramming all those elephants into a theatre, but I’m sure that just like Eric they will come up with an ingenious solution!”

Too Many Elephants in this House was honoured by the Children’s Book Council of Australia in the Early Childhood category and has been selected as the 2014 National Simultaneous Storytime book.

In 2013, NIDA’s world-first production of another popular children’s book, Mr Chicken Goes to Paris was a huge hit entertaining 4000 very excited children. Too Many Elephants in the House is sure to be another favourite, with something to offer audiences of all ages from the smallest first-time theatre-goer to the child in all of us.