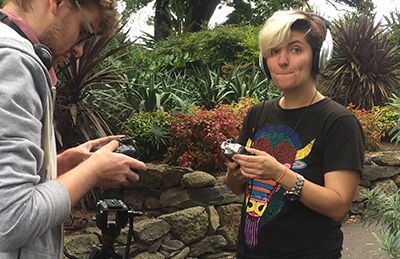 We recently spoke with Master of Fine Arts (Directing) student and New York City native, Rachel Kerry, about her career to date and how she came to study at NIDA.

We heard you’ve had a much longer NIDA journey than most of our students. How did you come to study directing here?

I actually came to NIDA 13 years ago, when I was only 17! In my senior year of high school, my mother and I were living on Guam (which is a US island territory). My mother was working at the University of Guam when I became very interested in pursuing theatre, particularly acting. So my mum looked into training opportunities that would expand my skills and help my chances for long-term employability. That’s when she discovered a week-long NIDA Schools program. Next thing I knew, she enrolled me in the program and I was off to Sydney.

Over a decade later, I still use techniques the program taught me, but in my directing.

After achieving a BA in Theatre with Honors in Multimedia Literacy from the University of Southern California (USC), I moved back to New York City, where I was born, and started Brain Melt Consortium – a theatre and media arts company that explores pop culture, gender and sexuality, and genre cinema.

The company went through a number of incarnations and it was only in the last two years that we began to focus on ensemble-devised work. We see the actor as a collaborator and creator in the storytelling process.

I had been thinking a lot about the issues that the arts industry is facing today, the role of the director, and how to better collaborate with other artists. That’s when I decided it was time to push my craft further. After researching a number of directing programs, I found that the NIDA Directing course stood out above the rest. Its focus on Stanislavski’s Active Analysis and its multidisciplinary approaches to directing make it unlike any other directing course in the world. I had to apply.

I submitted my application, had two Skype interviews with our Head of Directing, Dr Egil Kipste, and our Graduate Studies Lecturer, Dr Benjamin Schostakowski, and here I am.

How does it feel being back here after so long, having gone from trying out our acting class and figuring out how to get into the industry, to knowing exactly what you want out of your career?

Coming back here 13 years later, there are some things I still remember so vividly and fondly. I remember this café; I remember the foyer, which has gotten significantly bigger; I remember distances from one classroom to another. It still amazes me that everything I have done since then has somehow brought me back to this place. I remember NIDA for its positive atmosphere, a place full of sincere enthusiasm. I love being back.

And I really enjoy seeing how much we, staff and students, cherish collaboration. We’re in our second term of the program and have already been exposed to so many amazing opportunities; we’re currently on our way to Berlin, to work with students at the Ernst Busch Academy of Dramatic Art and attend the Theatertreffen festival. We’ll also be directing triple j Unearthed music videos when we get back to Sydney at this end of this month. It’s surreal.

What do you hope to learn this year and what are you most looking forward to in the program?

The collaborative nature of the directing course inspires me every day. It’s very common for directors to remain isolated from other artists, but not here. My fellow directing students and I have become a strong cohort, working together and feeding off of each other’s strengths, while establishing our own individuality. I look forward to keep learning from my brave, zany, insanely talented classmates.

Having spent the last seven years self-producing work, I was often without mentorship or professional guidance. NIDA provides a safe environment where, with the guidance of my mentors, I can make mistakes and learn from them… without worrying about getting fired of course.

Fast-forward to next year when you finish your course. What direction would you like your career to take?

I want to create candy-coloured horror comedies and weirdo love stories. My work is a little bit punk and a little bit silly: it’s a skulls, hearts and rainbows aesthetic.

My dream is to be able to write and direct for both theatre and new media. It’s important for artists to constantly push the boundaries of what theatre can do. Plus, I am invigorated by new media storytelling. I want to create original content for streaming platforms. There are more opportunities than ever for independent artists to pitch to networks like Netflix and Stan. It’s something I feel hasn’t been fully tapped into here in Australia.

And on a more personal note, what do you miss about The City That Never Sleeps?

My cat. I’ve had her since she was a kitten and she’s turning 11 this year. It was a little heartbreaking to leave her behind, but she is in good hands.

Oh, and New York bagels! At the farmers’ market in Marrickville on Sundays, there’s a stand that sells Brooklyn-style bagels, but… they aren’t quite the same. To fill this doughy hole in my heart, I’ve switched to pies and Vegemite… but not together though.

Ellen is interested in how theatre brings people together and instigates collective reflection, especially through comedy.