A cavalcade of styles comes to NIDA Directors and Designers Productions 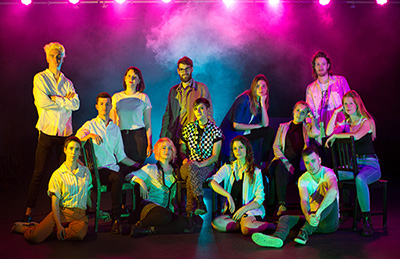 This year’s National Institute of Dramatic Art (NIDA) Directors' and Designers' Productions featured seven shows from Australia’s next generation of creatives. They included a satanic gay wedding, a famous Russian-trained clown, Fassbinder and Bergman screenplays, Oscar Wilde and even a Greek tragedy in the mix.

Over four nights, from 6 - 9 December, the short productions explored power, justice, violence and sex and include jug bands, acrobats and violins. The Master of Fine Arts (Directing) students range from emerging theatre makers and poets to award-winning writers and directors, who worked with final year Bachelor of Fine Arts (Design for Performance) students.

Kate Cherry, Director/CEO NIDA said: ‘We’re all excited to see the results of the students’ intense creative work. These productions are a testament to their passion and commitment and include industry collaborations with performing arts organisations such as the National Institute of Circus Arts.’

‘The collaboration with Bachelor of Fine Arts (Design for Performance) students enables the directors to experiment and explore within the educational and professional sphere of excellence at NIDA,’ said Dr Egil Kipste, Head of Directing at NIDA. ‘The course aims to enrich the directing and design process and equip each student with a toolkit of techniques to help develop their own voice,’ said Dr Kipste.

Rachel Kerry, director and Master of Fine Arts (Directing) student, was hard at work rehearsing The Show That Smells. ‘It’s a post-modern parody of an imaginary 1930s horror film with a queer lens. Think gay historical fan fiction with famous icons, big and weird. Vampires fighting hillbillies, that sort of thing,’ she said.

Christopher Baldwin, BFA (Design for Performance) student, worked on the screenplay version of Fassbinder’s In a Year with 13 Moons. ‘I had to be careful not to look at Fassbinder’s movie too much,’ he said. ‘Because the director Sarah Hadley and I love the movie, we got to a point where we had to put the movie aside and decide what we were actually looking for within the screenplay – that’s probably the biggest thing. Ultimately, it doesn’t work if you try to recreate a movie on stage.’

Details of all shows here.