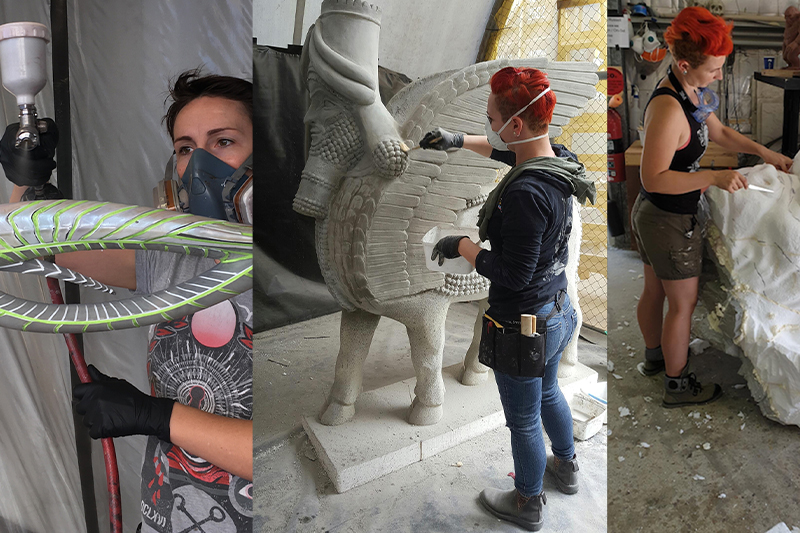 Above: Assisting in art finishing for Aquaman (left), creating large foam sculptures for Dora and The Lost City of Gold (middle) and assembling a four-metre tall CNC cut foam statue for Godzilla vs Kong (right). 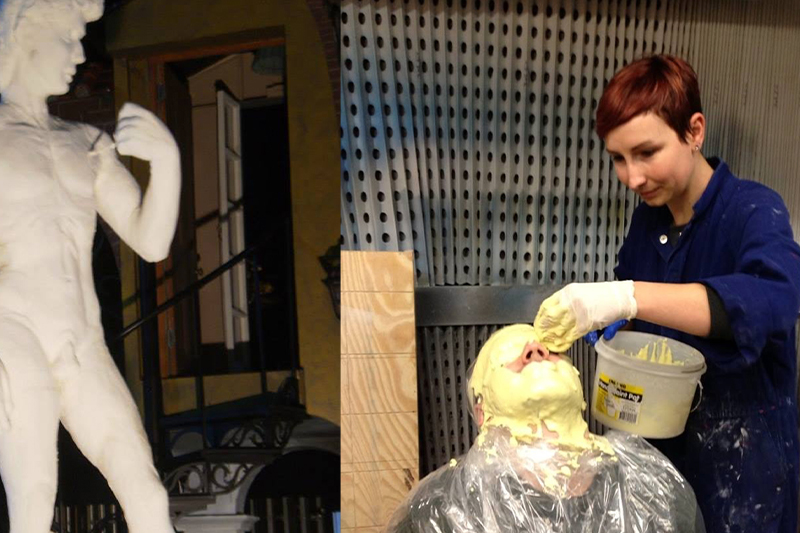 Above: While at NIDA Hannah sculpted a scale replica of the statue of David for a student production (left) and learnt SFX mould-making techniques (right). 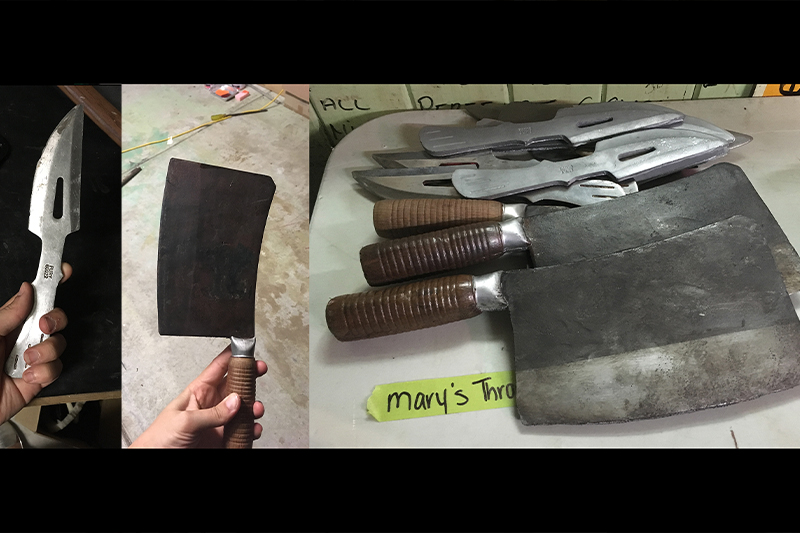 NIDA alumna Hannah Crosby (Properties and Objects, 2014) is a multi-disciplinary artist who has worked across video games and motion pictures like Thor: Ragnarok and Aquaman for the past 16 years in both digital and practical art creation. We caught up with Hannah in her busy day as a Senior 3D Artist at Gameloft Brisbane, who recently released a stunning visual remake of gaming classic The Oregon Trail™ on Apple Arcade.

Before transitioning into film, Hannah worked in video games production as a 3D artist. After completing a Bachelor at NIDA Hannah branched out into prop sculpture and art finishing for film props.

What first inspired you to get into this field? Did you study visual arts at school?

Film was a natural industry for me to gravitate to as I’ve been both an avid artist and a geek who loves fantasy and sci-fi movies, ever since I was a child. I was lucky to have parents who encouraged my artistic leanings. I never knew what I would do with this hobby until I saw some making-of videos from behind the scenes of the Lord of the Rings and I realised this was something I could pursue as a career.

What are some of the common weapons that are produced in stunt weapons for film?

The category of ‘stunt props’ can include anything from fantasy swords, to realistic guns, to items used as weapons in the context of the scene, like a rock or heavy torch. All these frequently need a ‘hero’ version which can be seen close up and look realistic, and various soft versions for use in action scenes. These ones are often created by taking a mould of the original hero prop and casting a version in soft foam which is then painted to look identical, at a distance. Swords are probably the most common type of stunt prop as they may need to contact with an actor and obviously a sharp or even hard blade would do damage. For Thor: Ragnarok the prop team and I had to paint hundreds of stunt swords for an epic battle sequence at Asgard.

What are some of the materials you commonly use?

When creating a fantasy prop, we frequently start with oil clay and water clay, which is all very skin-safe. Then we create a silicone mould and perhaps a fibreglass shell to encase it. Many silicones are skin-safe but as fibreglassing is a specialist skill there is often a dedicated team to handle that part and it requires more personal protective equipment (PPE).

When it comes to the materials that are cast into the moulds more care needs to be taken as resins and expanding foams can release fumes when going through the chemical reaction to harden. Painting is also frequently done with harsher chemicals like automotive paints. For that reason, good use of PPE is essential and required; wearing gloves, eye-protection and a respirator is a normal part of my day. This is to keep us safe not just from immediate spills, but also to prevent the long-term health effects of repeated exposure that can build up in the system over years if proper safety guidelines aren’t followed.

What are some of the challenges for someone working in this industry?

Film is an industry that demands a lot, the standard in Australia is ten-hour days, and in order to make deadlines it can sometimes go longer. A lot of film veterans take breaks in between large contracts to recharge for the next project.

Having a stable family life with the disruptions of film schedules and relocation is a challenge. The industry is very dependent on government tax subsidies to win film contracts (this is true anywhere in the world), so you may need to be prepared to relocate for the duration of a film, or at least base yourself where the big studios are, like the Gold Coast or Sydney.

Why did you switch focus from digital creation to practical prop sculpture and art finishing?

After several years as a digital artist I was feeling a lack of challenge. It was a good time to look at spending some time pursuing film, my other love. The prop course at NIDA gave me the opportunity to skill up in all the techniques needed for real-world art creation, like large-scale sculpture, airbrushing, even welding. Working at such a large scale on physical media was an exciting new challenge, but I was still able to use my digital skills when I began working professionally, as 3D printing and other modern manufacturing methods are becoming more common in prop production.

Are there many women in these roles?

The distribution of women in film roles can depend very much on the department. In the art department it’s common to find many women in senior roles like Designer or Department Coordinator. Set dressing, costume and makeup SFX also have a large proportion of women, frequently in senior or department-heading roles, in fact the makers in the costume department are almost always entirely female! However, departments like Props and Construction are very heavily male-skewed and it can depend very much on the head of that department and the personalities of the individuals who work with you whether it’s a welcoming environment for female makers. I’ve had both good experiences and bad in these departments.

What is one highlight of your amazing career so far?

To be honest I’m absolutely blown away when I walk into one of the huge sets that transports you to another place - like the Sicilian village from Aquaman, or the streets of Sakaar from Thor: Ragnarok. But I’ve always wanted to work on a lower-budget horror movie and when I was Prop Master for Two Heads Creek, I got the chance. Hiding just out of shot behind a silicone torso, holding the hoses that directed blood from the ‘blood cannon’ to spray out over the set in a ridiculously over-the-top decapitation sequence, was one of the many highlights of that film, which was just a joy to work on.

Feeling inspired? Expressions of interest to study a Props at NIDA in 2023 are now open. Visit nida.edu.au/properties-and-objects for more info.

Rose is interested in designing new dramatic works for theatre, supported by her background in architectural studies.