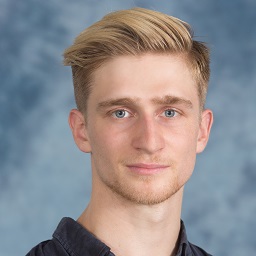 Growing up in a little town on the Tasmanian coast, Luke spent his youth surfing, swimming, and volunteer lifesaving.

A funny, gentle soul, he found great happiness in movies, TV, books and playacting. He loved dreaming up stories and imagining what life would be like walking in other people’s shoes.

He never really stopped walking, and in 2017 Luke got into three of the biggest acting schools in Australia. He picked NIDA and set off for the city with that Opera House you might have heard of.

Since arriving, Luke has contended with apocalyptic mega-fires, pollution, obnoxious drivers and one tiny little global pandemic. He thinks Sydney could chill out a bit, but despite the chaos he’s grateful to be living his acting dream in such an exciting city.

Luke would like to thank NIDA for giving him three years striving to be the best actor possible. Not to mention plenty of jumping around like a frog, and some incredible friendships.

The next step is to make some really great theatre, film and television. Luke is passionate about stories which make us more generous, more inclusive and more kind.

Joseph is an  Aboriginal creative who completed a Bachelor of Fine Arts (Acting) at NIDA in 2018.