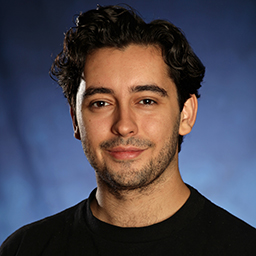 Samuel has been involved in theatre and film since before he was born, appearing in Sidetrack Theatre and SBS-TV productions while still in utero.
Before attending NIDA, he undertook a double degree in Media Arts and Production/Creative Intelligence and Innovation at University of Technology Sydney.
A founding member and resident director of Tough Kids Productions, Sam was nominated for the Best Director at Sanford International Film Festival for his film Only The Beautiful and nominated for a Robin Anderson Film Award for his film School Night.
He has directed over 25 productions for stage and screen including the premiere of The Teaching of Darkness at Chester St Theatre, The Viagra Monologues at the Blood Moon Theatre, and Blood Wedding at the Lendlease Theatre.
At NIDA, Samuel directed Fool for Love by Sam Shepard with the Actors Centre Australia, devised SEX DEATH AND THE INTERNET with the Queensland University of Technology, directed Plastic, a music video for MICRA, and co-directed The Invisible Bird, a new opera for Sydney Chamber Opera. He adapted Wake in Fright for his graduation show.
Since graduation, Samuel continues making work in theatre and film with a particular focus on devised film work and the development of new theatre work with emerging and established writers.